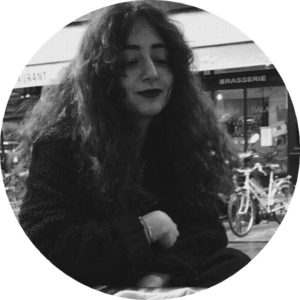 I am a third-year PhD candidate in Sociology at the Ecole des Hautes Etudes en Sciences Sociales (EHESS); I conduct my research at the Interdisciplinary Research Institute on Social Issues (IRIS).

I am also a lecturer in epistemology and sociology at Sorbonne University and Paris-Saclay University.

After a dual degree between Sciences Po Paris in Political Science and La Sorbonne Paris IV in French Literature, I graduated in 2019 from the Environmental Policy master’s at Sciences Po (Paris School of International Affairs). I then decided to pursue a master of research in Territories, Spaces, Societies at EHESS during which I wrote a master’s thesis entitled « The Manufacture of the Illegitimate – An ethnography of Beirut’s bus line 15 ».

My research focuses on the stakes surrounding the regulation of private transport in cities where they constitute the only shared transport available. My fieldwork focuses more specifically on the bus network in Beirut. My research themes include the romanticization of urban poverty, the question of the empirical manifestation of the presence of the State in the practices of dwellers, and the invention of the city through discourse.

A longtime bus passenger in Beirut, I started researching the bus network when I joined Bus Map Project’s team as visiting researcher. Bus Map Project is a group of cartographers and riders working to document the Lebanese bus network. As a passenger, I had started to wonder how the invisibilization and romanticization of the bus network in Lebanon influenced the mobility practices of its users and non-users. The questions that arose alongside this first interrogation fueled my desire to join Bus Map Project and then to pursue my research in academia.

Beyond the analysis of transport in Beirut, my work raises questions about the legitimation and delegitimation of various forms of private urban mobilities, deemed « disruptive » and « creative » when they fit into the criteria of  smart-city branding ; or « chaotic » and « informal », depending on the social classes that use and operate them. The case study of the regulation and practices surrounding this Lebanese bus network more generally opens the door to an epistemology of what « makes » a city, and the conditions that determine its functioning. In many respects, Beirut can be considered a borderline case, which allows us to question the threshold up to which shared transport infrastructures can regulate themselves. The increasing trend of commodification of mobility in the world, whether by opening up public transport companies to competition, or by the rise of companies treating mobility as a service (Uber or Careem), underlines that the analysis of the Beirut transportation case has much to teach us.

Since 2021, I have been collaborating with the team of YouTube channel Marketing Mania, where I participate in creating and developing their online courses. As a consultant, I also help French youtubers maximize their reach and grow their chanels. I specialize in content strategy and script writing.

Besides my academic research, I am interested in the mystification and romanticization of certain urban realities; in exploring the cases in which nostalgia can lead to a denial of reality; in the right to housing and mobility; and in the performance of intimacy (this expression is from Maggie Nelson) on social media and in literature. I am passionate about French literature and oriental dances. I really enjoy writing on these subjects; hence I sometimes let them infuse my academic work.